Courtesy : FB page of the club.

Sheepscombe Cricket Club is inextricably linked with the poet Laurie Lee ( the poet best known for Cider with Rosie).  For many years Lee allowed the club free use of a field he owned in Sheepscombe, now called the Laurie Lee Field.

Sheepscombe, a sleepy village in Gloucestershire lying in a narrow hypnotic village behind the Cotswold scrap.   It nestles amidst green hills with clumps of trees and quaint elevation.  It is short walk up the hill from the village Hall car park to the quintessential Butchers Arms Pub.

The ground is idiosyncratic in the best traditions of English village cricket. There is a huge drop of 15 ft from the pavilion side to the boundary on the other side.  It plateaus enough to prove a flat pitch area more or less in the middle.  The bowler’s run up from one end is so steep that the shorter batter can’t see him till the last few strides. Yet it remains one of the most beautiful grounds of the World.  The home side knows to alert fielders and shout a warning if a catch or groundstroke is on its way.  Boundaries are a lot easier to earn on the downward slope.  A six up the hill towards the pavilion is a rarity.

Lee wrote affectionately of his Uncle Sid who learned his cricket “ on the molehills of Sheepscombe, which is not far from chacterising the ground today.  It is all very English and reminiscent of A.G. Macdonall’s famous chapter about county cricket in “ England, Their England”.

Lee’s sympathy towards cricket remained even after a disquieting experience at SCG.  He was watching a game from the  notorious Hill (Hill was since demolished now to make way for “Victor Trumper stand”) “ when he was hit by a flying beer bottle.  After 4 stitches in hospital he said of the experience “ I enjoyed it, but if I go back again I will wear a Tin hat”.

Lee died in 1997, but is still remembered with warmth at Sheepscombe.  After his death, the club bought the ground from his Estate with help from the England & Wales cricket Trust and from a very supportive local community.  In celebrating the purchase, the club unveiled a fine bench overlooking the pitch in his memory.

The Pavilion that stands today was erected in 1994 and has all the modern facilities of showers, toilets and a proper kitchen counter.  The sense of history that pervades through is fascinating.  The pavilion walls are covered with pictures and reports of the development of the ground.  A table is stacked with books about English cricket including this ground.  There are also several volumes of books penned by the Gloucestershire cricket writer, Nico Craven, a frequent visitor to the ground.

The SCC (sheepscombe cricket club) was founded in 1896, playing in Gloucestershire County cricket League on Saturdays and enjoy occasional Sunday and evening matches.

In 2013, the Club bought this ground by fund raising and a grant from ECB.

Sheepscombe village hall is the centre for many activities and events acts as the social centre for village life.   It is the place for parties, film shows, meetings, Bridge and Table tennis, concerts and the home of the Famous(Infamous)Sheepscombe Pa

Once in a year in February a group of ardent cricket lovers will put on their whites and venture out onto a frozen lake in front of the promenade at St. Moritz, the famous Swiss ski resort.  Over the course of the weekend 4 English and Swiss teams will play a round-robin tournament of 3 games per team.

Apparently, back in 1988 the snow failed to appear and rather than twiddle their thumbs, someone had the bright idea of playing a game of cricket.   That’s how Cricket on Ice was born.

Participation is by invitation only,and there are tedious tests of skill and players of varying abilities from a novice to quality cricketers.

The St. Moritz Club has a very limited fixture list and relies on guest players who have included former England Test stars like David Gower and Gladstone Small.

The St. Moritz Tourist Board takes a keen interest and helps out with the lake infrastructure and some financial backing.  A little luxury is heating inside the tents, courtesy a sponsor.

A women’s team is all set to take part very soon.

The social aspect of the weekend is important, according to organisers.

In an incident which made the newspaper headlines, David Gower left his hired car on the lake overnight while he enjoyed an evening’s conviviality to participate at the tournament’s blacktie gala dinner.  Returning in the morning, he found the vehicle had sunk to the bottom of the Lake, an incident which cost him around 20,000 Swiss Francs

An International tournament called “Cricket on Ice “ has been played on Lake St. Moritz since 1988.  British Olympic Bobsledder ( Bobsledder is an Olympic winter sport)  Keith Schellenberg is sometimes credited with inventing ice cricket in St. Moritz.

Few sporting occasions can beat the February Cricket festival on the ice of the frozen lake of St. Moritz.

In 1988, a group of intrepid British cricketers challenged the student of the international boarding school Lyceum Alpinum Zuoz to a match.  Ever since, it has become an integral part of the official cricket calendar , attracting international players and high-flying business people from all over the world. There’s no entry ticket and anyone is welcome to drop by and watch cricket while enjoying some food and drinks and relaxing and enjoying with the players and other guests.

Virender Sehwag led the team called Palace Diamonds and Shahid Afridi led another team called Royals in a T-20 two match series here at St. Moritz and both the matches were won by Royals.

Cricket on Ice, the most prestigious annual event in the domestic Swiss cricketing calendar, takes place on the lake of St Moritz from Thursday to Saturday every February. 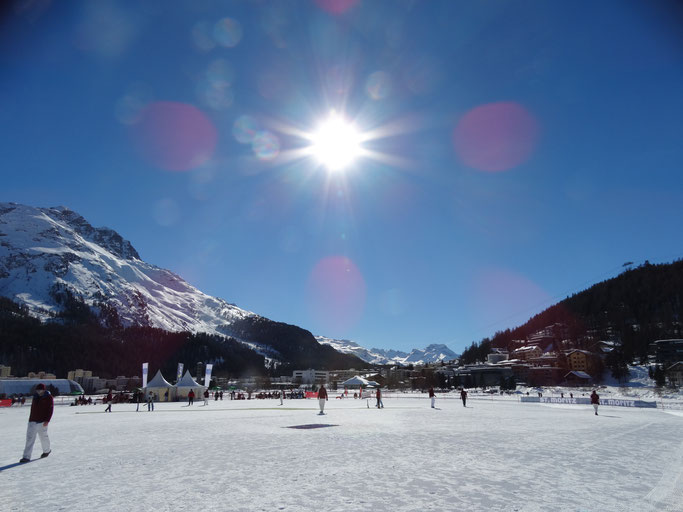 Cricket on Ice in St Moritz is a sensational experience, attracting cricket enthusiasts (some international players, some high-flying business people) from all over the world. The event provides teams the opportunity to participate in the most prestigious annual event in the Swiss cricketing calendar in an atmosphere of fun and sporting brilliance.

It also provides businesses with an exceptionally unique platform for communication, networking and, of course, business. Your team and your brand will shine in the extraordinary setting of the mountains, sun & sport.

The picturesque Swiss resort of St Moritz is famous for the beauty of its ski slopes and the Adrenalin rush of the Cresta Run. But for sheer quirkiness, few sport events can beat the February cricket festival on the ice and snow on the frozen lake.

It would be a pleasure to welcome you to St. Moritz, to offer you a chair in the sun from where you can watch a cricket match & enjoy delicious refreshments in the champagne climate of St Moritz. 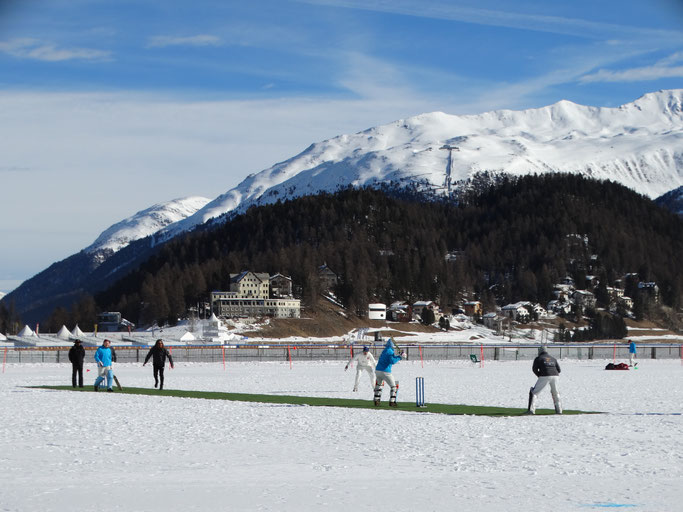 After a one year absence due to the Covid-19 pandemic, the 2022 Cricket on Ice Trophy was bigger & better than ever with six teams competing from Thursday 17th – Saturday 19th February 2022.

Rooted in the days of monarchy, sown with the seeds of tradition and watered with the acceptance of different cultures.  That’s cricket in Hawaii, U.S.A.

In May 1893 two of the foremost cricketers of Honolulu cricket club, Mr. Aurerbach and Weedon, wrote to the Minister of Hawaii enquiring whether they might use an abandoned baseball ground in the shadow of the Diamond Head crater for their cricket matches.  The Minister said yes and granted them the use of the ground for practice and play. They could also take over the run-down baseball stand if they wished for “dressing rooms’,  Keeper’s room etc.  The board would also gladly allow them use of the sprinkler.  With this permission, the Honolulu Cricket club was established, becoming the oldest sporting organisation in the Pacific.

Cricket itself had become established in the mid-19th century under the patronage of King Kamehameha IV, surprisingly for a game which has never really been taken by the indigenous population.

According to Honolulu CC, cricket was the King’s favourite sport and he would often practice his skills on the grounds of the Palace.  A political motive for his interest can’t be ruled out as a devotion to cricket aligned his country more closely to the United Kingdom, a policy he favoured.  The State flag of Hawaii still carries the Union Jack in its corner.

The matches involving English ship putting in the Sandwich Islands were being reported in local publications as early as 1847.

Cricket slowly spread to some of the other islands such as Maui and Big Island of Hawaii.

Originally called Makiki, Kapiolani Park is named after Queen Kapiolani. Queen consort of King David Kalakaua ruler from 1874 to 1891 and an honoured guest at Queen Victoria’s 50th Jubilee celebration in 1887.   This Park is the largest and second oldest park in Hawaii located in Honolulu on the east end of Waikiki just beyond Kuhio Beach park and the Waikiki residential neighbourhood..

The Park began life as a race course and nowadays cricket is just one of the many sports including tennis, football, Rugby Lacrosse, Archery and baseball.

Right at the edge of the World famous Waikiki Shell and nestled at the base of Diamond Head Crater in picturesque Kapiolani Park, the Honolulu CC boasts one of the most idyllic cricket grounds in the world keeping with the Hawaiian spirit of Aloha.

Kapiolani Park is a peaceful refuge from Downtown Honolulu & Waikiki Shell.  Tall trees, lawns and gardens are there.  All kinds of sports are played there from Tennis to Soccer to basket ball and baseball to Lacrosse, rugby and archery and even frisbee.

“We are quite the International mix “, Berwick, the HCC President said.  Part of it, has to do with Hawaii’s isolation and part of it ties in with Hawaii being a melting point.  “We are as much a social club as we are a cricket club.   It’s special for a number of factors.  And that includes being recognised as the oldest sporting club in the Pacific.  Though the Club was established in 1893, but competitions were being held in 1840s gaining the favour of Kamehameha IV.

The first cricket pitch in Honolulu is near where Makiki District park is located and was known as the Makiki cricket grounds.

HCC has hosted various foreign sides and has been hosted by many teams whose club shields are displayed in HCC’s virtual club house online.  Honolulu toured New Zealand in 2010 and India in 2011.

Sachin Shah isn’t sure he’ll make the trip to his home country (India) but has been happy to maintain a connection to his native India through cricket.  Shah continues ,“ I lived in Chicago and Detroit where there are many Indians and cricket was common  . When i came here (hawaii) in 2001, there were not many Indians , so i was really surprised to see it played“.

HCC welcomes the interested and curious , those who don’t know the difference between a carry and cherry or a doosra and a donkey drop.

Blessed with a beautiful climate, we are able to play all year round which enables us to entertain visitors from around the world at anytime. As one of only two cricket clubs throughout the Hawaiian islands along with the Maui Cricket Club, the Honolulu Cricket Club always looks forward to hosting visiting teams.