The LV= Insurance Test Match between England and New Zealand at Edgbaston was the first pilot event within the second phase of the Government’s Events Research Programme. There were around 18,000 spectators each day, 70 percent of total stadium capacity  On all the 4 days including the 4th when England was sure to be defeated. All the individual ticket holders presented a negative COVID-19 result from an NHS Rapid Lateral Flow Test, completed within 24 hours in advance of the day they are attending, and gave  consent to take part in the programme. The pilot event will be used to analyse testing protocols for all spectators in attendance, the use of social distancing and face coverings when moving around the stadium, and gathering further evidence on the risk of transmission at mass participation events. As part of these Government protocols all ticket holders will need to be aged 16 and over. 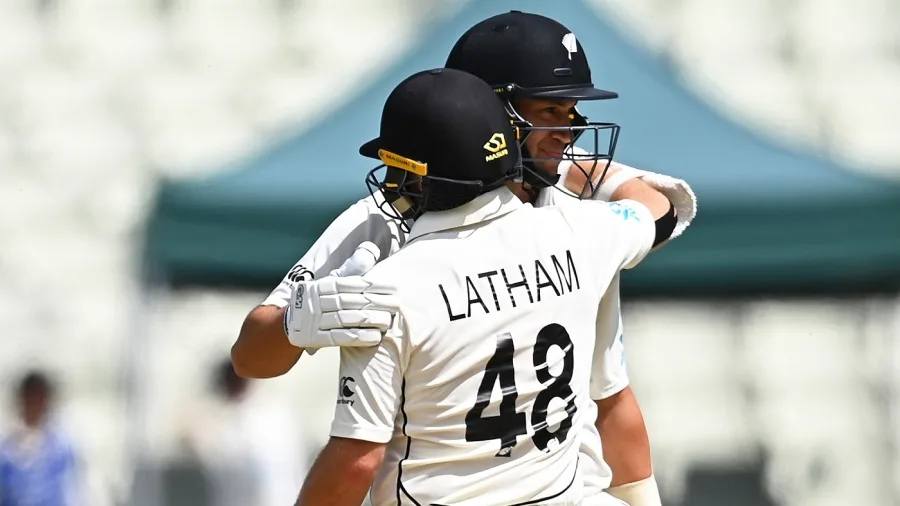 The Edgbaston ground is a favourite hunting ground of the England team.  They were defeated only once in 2019 against Australia since 2008.  So it was like a fortress for England.  And when New zealand defeated England  yesterday it was a la Australia’s defeat to India last year at GABBA.

The Kiwis  bench strength came to the fore and  did the trick at Edgbaston ground.  New zealand made as many as  six changes in the team including their captain Kane Williamson, (who was nursing an injury )that played at Lord’s last week.. In fact Matt Henry who did the early damage in England’s both innings was a replacement for Tim Southee and bagged the Player of the match award with 6 crucial scalps in the match.

ENGLAND’s batting woes continued from Lord’s and here at Edgbaston, Birmingham in the second Test as New Zealand completed the formalities on the 4th day and ensured a facile victory without any hiccups as they chased a paltry 38 runs for the loss of 2 wickets only

&  wrapped the two-match series with a win1-0  with almost 2 days to spare. Thus ending the hegemony of England at Edgbaston.   It was also the first series victory of the Kiwis over England in England since 1999 and their three consecutive series win against England  as they defeated England in 2018 & 2019 in their home series.

It was thoroughly a team effort of the Kiwis in the batting unit  as 3 top order batsmen including Will Young who played in place of Kane Williamson, crossed 80 runs and took a sizable lead of 85 runs in the first innings.

It was the second innings capitulation of England batsmen and it could have been worse but for the 8th wicket partnership of 44 runs between Olly Stone and Mark Wood England ended the 2nd innings with 122 runs as they were tottering at 76/7.

it was a thorough exhibition of all round skills of the Kiwis team that brought victory.  And England had to lick their wounds as they were defeated in their own backyard .

In the post match presentation, Joe Root  clearly mentioned that the Kiwis outplayed them in all the three departments and he was also put an embarrassing position and has been obliged to answer questions about the Ollie Robinson affair, a rest-and-rotation policy over which he has little control, or a plethora other issues like .

contesting allegations of institutional racism, and wrestling with the issue of historic social media posts which demonstrate the sexist and racist attitudes which pervaded in the past, it feels inappropriate. But with his soft voice  he defended his team, he took responsibility for underperforming personally and he refused to hide behind excuses.

So  it’s not worth quibbling over whether Jack Leach, the successful spinner should have played at Edgbaston or whether England’s slip cordon is standing at the correct angle. The problems go far deeper than that.

The soft signal by the field Umpires issue reared its ugly head  here at Edgbaston When Devon Conway edged a delivery from Stuart Broad and Zak Crawley at gully grabbed the ball and claimed the catch and all England players were in jubilation mood to celebrate it.  But the on-field Umpires referring it to the TV Umpire with a soft signal of NOT OUT.  And the TV Umpire had to concur with the on-field umpires though it was observed that the fielder’s fingers were under the ball at the time.  Now, the bowler in the equation Stuart Broad vociferously contested the wisdom of SOFT SIGNAL of the Umpires and asked ICC to look into this issue and withdraw the Soft Signal by on field  Umpires and ECB officials also endorsed Stuart Broad’s suggestion.

Already India’s Captain Virat Kohli  and West Indies captain (at the time)  Jason Holder lent their voices against the Soft Signal .  But ICC has turned a deafen ear to the raging issue.

And  in the other Test match played around the same time  at Darren Sammy National Cricket Stadium, Goss Islet, St. Lucia (West Indies) the Pace bowlers had a field day as they took 27 wickets that fell in the Test as the  WEST INDIES suffered a humiliating Innings defeat against the visiting South African team in the First Test led by their new captain Dean Elgar.

After electing to bat , the Windies were blown away by the Proteas bowlers headed by Lungi Ngidi and Nortje for just 97 runs  in just 40.5 overs on the first day, the South Africans put up 322 runs thanks to a brilliant knock by their wicket keeper, Quinton de Kock, who found his form in a blistering attack scored an attractive century.   And in the second innings of West Indies, it was the old horse Rabada, who also found his bowling form ripped through their batting line up with 5fer and Windies folded up just for 162 runs and suffered an ignominy of an Innings defeat.

It was also Dean Elgar’s first win as Test captain, a pleasing result for the new leader. He joined a  list of skippers who led their side to victory despite scoring no runs, taking no wickets and holding no catches in the Test.