Located in the precincts of Chandigarh(Punjab), Mohali is a shopper’s paradise and is known for its cricket ground.  Renamed as SAS Nagar District in memory of Sahibzada Ajit Singh, elder son of Guru Gobind Singh, the city along with Panchkula and Chandigarh form the Chandigarh Tricity.  Mohali houses many historical places such as Gurdwara Angeetha Sahib, Gurdwara AMB Sahib, the Baba Banda Singh Bahadur war memorial. Mohali is one the most preferred locations among I.T. outsourcing industries and many MNCs have built their HQ here.  The Rose Garden and Pinjore garden are some of the other attractions here but with cricket being  than just a sport in India, the main attraction in Mohali is Mohali cricket stadium. 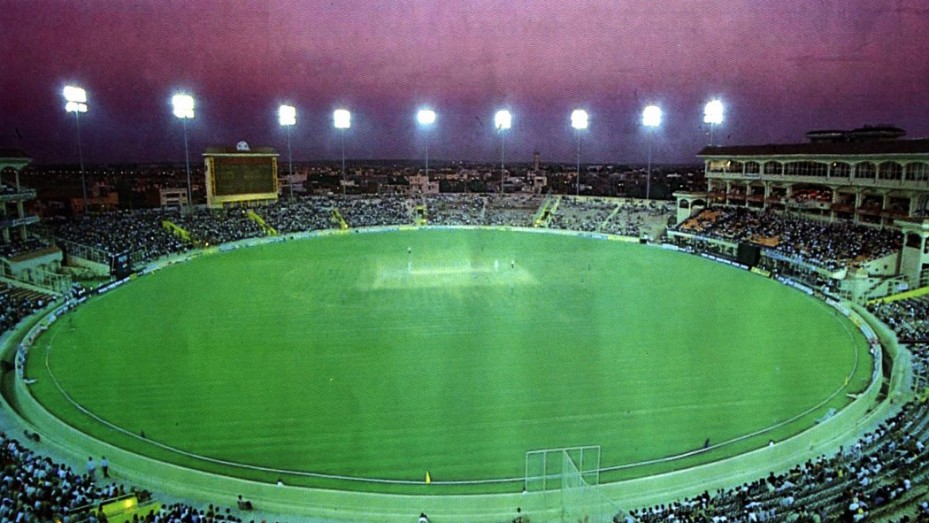 The Punjab Cricket Association (PCA), Inderjit Singh Bindra (I.S. Bindra) stadium is a cricket ground located in Mohali, Chandigarh, Punjab. I.S. Bindraji  has served the BCCI with many positions and the stadium is named after him.   Before construction here, the land was barely a ravine area.  Earlier the PCA used to function mainly from the residence of office bearers but after 1992 it has built a world class stadium at Mohali having all the cricketing facilities of international level and the Association has located its HQ in the stadium.  The cricketing activities of PCA are well spread in the total area of Punjab & Union territory of Chandigarh.  PCA is instrumental in running the coaching and other activities in all major districts like Amristar, Jalandhar, Patiala, Ludhiana, Mohali & Chandigarh (UT).

The sporting wickets , lush green outfield, spacious dressing rooms, excellent practice facilities and state of the art Gymnasium have been hailed by cricketers world over.   This swanky stadium boasts of world class facilities including a large cricket practice and tournament ground and a seating capacity of 30,000 spectators which was originally a swamp land.

Unusually large floodlights 16 in number have been installed here.  The pillars of flood lights at this stadium are quite low in height to avoid collision with the aircraft from the nearby Chandigarh airport.

Green pitches are seen at Mohali and it helps pace bowlers especially in the first and second day of test matches.  Swing can often be seen in the first innings in a test match as there is grass on the wicket but as the time passes, the pitch becomes slow.  It becomes easy to bat on the second and third day of a test match.  On the 4th day, the ball starts to turn very much, the spin bowling is dominating.  The average first innings score varies from 300- 350 runs.  So, the team that wins the toss always decides to bowl first there is green grass present on the pitch, which gives the fast bowlers swing in the early hours.  Usually green grass will be seen on the pitch here but according to the pitch curator due to the intense heat in summer season, there will be lack of green grass on the pitch due to which it becomes easy to chase the target in ODIs here.

Mohali is India’s favourite hunting ground in Tests.  Out of the 13 Tests played here till date, India lost only 1 test in 1994.  India has won 7 tests here and 5 tests were drawn.

V.V.S. Laxman’s fighting  73 runs unbeaten in the second innings ensured India with a narrowest win by 1 wicket in Oct. 2010.  Zaheer’s opening bursts in this test won him the MoM award. In a leighter vein, a kooky claim by a fan at Mohali , Sanklesh Jimmy has sued ICC for not giving MOM Award to him.  In his legal notice, Mr. Jimmy claimed that by Not watching even a single ball of the match, he decisively turned the tide in India’s favour and hence deserved MOM award for him.

In the 1996 World cup 2nd Semi Finals between Australia and West Indies, Australia won the match by a whisker.  Defending a modest 207 runs, Aussies showed great character and pulled all their muscles to  scampered home  by just 5 runs and entered the Finals of 1996 world cup.

In spite of best bowling efforts by their bowlers and restrict Aussies to 207 runs, and sitting in driver’s seat while chasing , the Windies choked at the tight moment.  West Indies won the 95% of the contest but alas the Aussies won the final 5% of the match.

Deja Vu of  semi Final in 1993, this time it was the Tri-nation Titan cup match against Aussies in 1996, it was Sachin Tendulkar again in the thick of action to defend 6 runs in the final over and Sachin delivered his punch and India won by 5 runs.

The arch rivals India and Pakistan once again in a World cup match and of course this time it was the SEMI FINAL and Sachin Tendulkar was the cynosure of this match and he didn’t disappoint the crazy Mohali fans as he hit a powerful 85 runs to set up a fighting total of 260 runs and Pakistan could muster only 231 runs and India won by 29 runs and entered the Finals and went on to win WC 2011 after a gap of 28 years.  Sachin was the MOM of this match.